Set to make an elegant statement on the roads of Europe and making their world premieres at the 2012 Geneva Motor Show, the first two members of the all-new cee’d family combine dynamic, sophisticated styling with a new-found maturity and prestige.

The unveiling of the new five-door hatchback and wagon cee’d models is a pivotal moment in Kia’s design-led transformation, replacing a vehicle which positioned Kia as a serious challenger to established European brands.

Significantly, this debut also marks another major step forward with the appearance of a new, bolder, confident Kia badge proudly emblazoned on the bonnet. The new badge delivers further sophistication to the look of the new cee’d five-door and wagon.

Launched five years ago, the first cee’d was extremely important to Kia’s new market strategy. The C-segment hatchback so popular in Europe does not exist in many other large markets, so the decision to design and build the cee´d in Europe, specifically for Europeans, was a first for Kia.v

“The cee’d has been a real game-changer for us,” considers Peter Schreyer, Kia’s Chief Design Officer. “To improve on it has been a real challenge and a significant responsibility. The hatchback is a five-door car for family use and it needs to be classless, suiting everybody from the architect to the postman. The wagon equally has to fulfil an often functional role yet deliver a pride of ownership derived from its stylish and individual lines.

“Taking the existing cee’d and delivering a new version is a big responsibility,” ponders Schreyer, “but our primary focus throughout this development has been to ensure the new cee’d family is as instantly noticeable and recognisable – and in some ways surprising – on the roads of Europe as the original was.

“Hey, the second album is always the most difficult!” he quips.

“The cee’d is a competitive product for a highly prestigious segment,” says Schreyer. “We wanted to build on the strengths that have already made the first generation models such a success, but with added emotion and character, improved proportions and stance.”

Schreyer is pleased to recall how closely the very first clay model of the new cee’d resembled the final production car, to the extent that he feels most people would not even be able to tell the difference. This is not often achieved in the real world with a design process that traditionally involves the complexity of gradual, often millimetric change through numerous stages.

Both Schreyer and Gregory Guillaume, Kia’s European Design Chief, attribute this unusually early success to a fundamental focus on proportion.

“We spent more time working on the proportions rather than the details,” says Guillaume. “We believe in getting the proportions, volumes and surfacing right. If you achieve that, it speaks for itself in the manner of a simple black cocktail dress. Then there’s no need to add too much detail.”

“From its proportions, it has a very dynamic appeal,” adds Schreyer. “It’s not shocking, it’s more mature, and it’s got a premium feel to it.”

Reflecting the sporting nature of the very first design sketches, the new cee’d is longer, wider and lower than its predecessor, with the same wheelbase. Its coupe-like proportions are emphasised by a steeply raked A-pillar, a very low belt-line in the front and lengthened, more distinctive window graphics.

The elegant simplicity of the body architecture combines fluid lines with enough tension in the bold surfacing to create a restrained yet muscular, sporting yet mature design, which gives the new cee’d a powerful, purposeful and firmly-planted stance from every angle.

Building on the strong family resemblance established by recent models such as the Sportage and Optima, the front of the new cee’d is dominated by the latest interpretation of Kia’s trademark ‘tiger-nose’ grille and aggressive, wraparound headlamp clusters housing signature LED daytime running lights.

Schreyer feels there’s something of the award-winning GT concept revealed at last year’s Frankfurt Motor Show in the relationship between grille and headlamps. He draws attention to the very upright installation of the grille itself – a deliberate styling decision designed to strengthen the car’s road presence and reinforce its confident, premium appearance.

Also making its world debut at the 2012 Geneva Motor Show is the wagon variant of the new cee’d.

“A wagon is a very European car,” considers Schreyer. “Other global markets are not so wagon-focused, and Europe is unique in this respect.”

The wagon features a revised rear door panel and C-pillar design which seamlessly extends the smooth, sweeping flow of the roofline. Schreyer is particularly pleased with the proportions of the cee’d wagon, especially since it delivers considerably more interior space.

The exterior of both models is enlivened by numerous small, yet highly significant detail touches which add to the prestige and premium feel of the new cee’d without detracting from the purity and elegance of the overall design.

The chrome grille trim varies subtly in cross-section throughout its perimeter, adding a prestigious appeal to the very front of the car. Within the front headlamp clusters, a long, eyelid-like blade housing the indicator defines the headlamp protrusion, making it visible from a rear three-quarter view of the car. The front fog lamps are trimmed with a high quality, dark chrome finish.

Viewed from above, the raised bonnet edges strengthen the muscularity of the front wings. A complex curve is built into the inner crease which changes angle as it flows from the A-pillar. Rather than converging on the bonnet badge, the crease ultimately follows the line of the headlamp cluster to the front of the car, reinforcing the width of the new frontal design.

Previously seen on both the Sportage and Optima, small castellations built into the glazing on either side of the windscreen head are a unique Kia signature, making the new cee’d instantly identifiable as one of the Kia family even when the vehicle grille is obscured.

The chrome surround to the side glazing is a key signature graphic which brings new-found prestige to the new model’s profile. The addition of a small front quaterlight to the glazing not only improves the car’s proportions by lengthening the glasshouse, but also adds light to the interior and improves visibility.

A faint bodywork crease running along the window head flows seamlessly into the lip of the integral rear spoiler, accentuating the long roofline, whilst a horizontal cut line introduced into the broad C-pillar reduces the visual bulk of the panel.

In a detail unique to the new cee’d, the aerodynamic shaping of the tail lamp clusters is reinforced by a crease which extends from the lamp itself into the adjacent bodywork, smoothing the airflow to make it break cleanly away from the rear of the car.

“For a global brand like Kia, the biggest difference in customer expectation we notice for Europe is the interior,” says Guillaume. “European customers are the most demanding as far as perceived quality is concerned. The interior of the previous generation cee’d was of good quality, very European, but we’ve taken it a huge step forward in terms of design language and architecture with the new model.”

“There’s a certain simplicity and logic to the architecture of the dashboard,” considers Schreyer.

“We built this up very clearly, like an aeroplane cockpit, with a very high tactile and quality feel,” he continues. “We’ve worked hard on improving the seating position over that of the previous car. The seat base height, armrest locations and heights, the pedal box and the ergonomics, have all been changed – making sure everything falls easily to hand.”

The new cee’d dashboard layout has a strong family resemblance to other recent Kia models such as the Optima. It features a cockpit-like design with an aircraft-themed, driver-oriented fascia.

The main control panel wraps around the steering wheel, placing all switchgear within easy reach of the driver. The panel does not extend the full depth of the centre console in order to maintain a feeling of overall cabin width, and give a more sporting feel and proportion.

The main control groups, such as audio and air-conditioning, have been segregated to bring a more premium, luxurious, big car feel to the interior. And carefully considered precision detailing gives the cabin an even more prestigious look and feel.

Soft touch materials add a new tactility to the driving environment. Instruments and switchgear are picked out in very thin chrome, the door handles are built up in a layered sandwich of high quality materials and the door handle itself has a sculpted, one-piece, shell-like quality, reflecting the premium values of the new interior design.

Kia Motors Europe
Kia Motors Europe is the European sales, marketing, and service arm of Kia Motors Corporation. With its headquarters in Frankfurt, Germany, it covers 25 markets in Europe.

About Kia Motors Corporation
Kia Motors Corporation (www.kia.com) – a maker of quality vehicles for the young-at-heart – was founded in 1944 and is Korea's oldest manufacturer of motor vehicles. Over 2.5 million Kia vehicles a year are produced in 15 manufacturing and assembly operations in ten countries which are then sold and serviced through a network of distributors and dealers covering 172 countries. Kia today has over 47,000 employees worldwide and annual revenues of US$39 billion. It is the major sponsor of the Australian Open and an official automotive partner of FIFA – the governing body of the FIFA World Cup™. Kia Motors Corporation's brand slogan – "The Power to Surprise" – represents the company's global commitment to surpassing customer expectations through continuous automotive innovation. 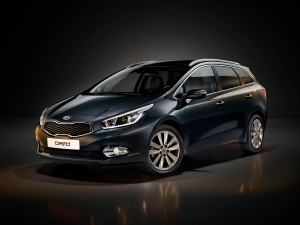