The all-new high-performance Kia pro_cee’d GT and cee’d GT are the brand’s most performance-focused production cars ever.  Both models feature a new turbocharged engine, unique exterior and interior design enhancements, and a suspension system that entertains the enthusiastic driver.

The two new GT models are powered by a new version of Kia’s 1.6-litre GDI (gasoline direct injection) engine equipped with a twin-scroll turbocharger and strengthened internal components.  Power and torque outputs are dramatically increased (compared with the non-turbo engine), with maximum power up 51% to 204 ps, and torque up 61% to 265 Nm.

“The new Kia pro_cee’d GT will have great appeal for motorists looking for style, performance and dynamism in their next car – and the similarly powered cee’d GT adds an extra level of practicality for buyers who prefer five doors,” adds Cole.

Inside, the GT models are equipped with Recaro sports seats, alloy pedals, bespoke surface materials and a seven-inch, racing-car inspired TFT instrument cluster to create an engaging, performance-oriented ambience for the driver and passengers.  For the first time on a Kia, the instrument cluster can be customised by the driver with a choice of two layouts – ‘analogue’ mode, showing a traditional speedometer and trip information, and ‘GT’ mode, which shows the vehicle’s speed in large, yellow figures and gauges displaying engine torque and turbo-boost.

Handling perfected on road and track
The GT powertrain and chassis were originally engineered in Korea and then developed during extensive road and track testing in Europe.  With ride and handling fine-tuned for European roads, the test programme included 160,000 km on German autobahns at an average speed of 150 kph.

The GT models also undertook 480 laps of the 21 km Nürburgring Nordschleife circuit for durability testing.  The Kia pro_cee’d GT and cee’d GT share the same unique 7-Year, 150,000 km warranty as the rest of the Kia model line-up in and are the only performance vehicles in the world with such comprehensive cover for motorists.

Subsequent developments to the suspension system ensure that the high performance credentials of the GT models are matched by exceptional dynamic characteristics, while retaining the outstanding ride quality of the pro_cee’d and cee’d.  This means both cars reward the enthusiastic driver while also being well suited for everyday driving.

Across both models, front damper stiffness has been increased by 30% in rebound and 10% in compression, while at the rear the increases are 50% in rebound and 200% in compression.  Spring rates have also been stiffened by 10% at the front and rear, the rear anti-roll bar has increased in thickness from 18 mm to 19 mm, and the front suspension benefits from stiffer bushings.  These changes allowed Kia engineers to reduce understeer and body roll in order to improve the cars’ handling characteristics.

Subtle re-tuning of the ABS system, together with the fitting of wider 225/40 R18 Michelin tyres, also make the Kia pro_cee’d GT and cee’d GT the fastest stopping variants of the popular cee’d range, braking from 100-to-0 kph in 36.4 metres.

The engine sound has also been addressed by Kia engineers, with intake and exhaust systems specifically tuned to give GT models a sportier engine and exhaust note.  Under hard acceleration between 1,000 and 4,000 rpm, a sportier exhaust tone has been increased by 10dB over the base model, achieved by improving the flow of air through the main muffler and reducing the air intake path.

Adding to the cee’d family line-up
The new pro_cee’d GT and cee’d GT are built on the same production lines at Kia’s Zilina facility as the regular five-door cee’d and three-door pro_cee’d, the latter first launched at the 2012 Paris International Motor Show as the third member of the second generation Kia cee’d family.

Sharing many key attributes with the regular models upon which they are based, both the Kia pro_cee’d GT and cee’d GT have an overall length (4310 mm), width (1780 mm) and wheelbase (2650 mm) which are also the same as standard models.  For the pro_cee’d and pro_cee’d GT, the roofline is lowered by 40 mm, the B-pillar is moved back by 220 mm, the side panels behind the B-pillar are new, as are the side windows, C-pillar, tailgate, rear light clusters and rear bumper. 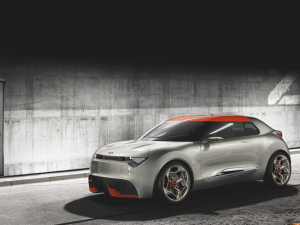