Geneva, 4 March 2014  – Kia Motors revealed enhanced versions of the brand’s best-selling model in Europe, the compact crossover Kia Sportage, today at the Geneva Motor Show. For 2014, the Sportage receives small but significant upgrades to its modern exterior, as well as a refreshed interior design and new materials throughout the cabin.

The exterior design features a new front grille, new LED rear lamp clusters, a new range of alloy wheels with a choice of 16-, 17- or 18-inch diameter, and a shark-fin roof antenna. Inside, the enhanced Sportage benefits from greater use of soft-touch materials across the dashboard and the upper door panels, a new Supervision instrument cluster with a 4.2-inch LCD display screen and new combinations of leather and/or cloth seat trims.

The 2014 Sportage also receives a range of new features, depending on model, to boost its appeal to buyers across Europe. Available features include a new audio system with 4.3-inch colour touchscreen with rear view camera, a new premium Infinity by Harman sound system (linked to the 4.3-inch radio display and the 7.0-inch navigation) with an external amplifier, sub-woofer and seven speakers, Kia’s multi-mode FlexSteer system, heated steering wheel, powered driver’s seat and new USB iPod connectivity.

Driving the enhanced Sportage will be an even more refined experience than the current model, thanks to a number of changes designed to minimise noise, vibration and harshness (NVH). A new soundproof windscreen, with an interlayer film between the glass laminations, reduces wind noise.

Three engineering improvements minimise vibrations – the front subframe is now bush-mounted (rather than bolted directly to the bodyshell), an intermediate shaft is added to the drivetrain, resulting in symmetrical (equal length) front drive shafts and a new mounting bracket for the transmission has greater rigidity and reduced resonance.

Additional modifications to the chassis and suspension further improve ride, handling and NVH performance. The modified front stabiliser softens the ride of the Sportage and reduces understeer under cornering, while a new damper valve system further improves the balance between a smoother ride and confidence-inspiring handling. Softer suspension top mounts also improve NVH and ride comfort. The rear springs have been stiffened slightly to improve trailer stability and body control while towing.

Accompanying the newly-fitted FlexSteer system, steering response and stability is improved by increasing the wheel offset angle slightly. The steering rack is now 4.5 percent quicker than the earlier version of the Sportage, with 2.7 turns lock-to-lock, for greater response and stability. New tyre specifications for all 17- and 18-inch wheels also ensures better handling in all weather conditions and greater levels of steering feedback.

In Europe, the enhanced 2014 Sportage will continue to offer customers a choice of diesel or gasoline engines, six-speed manual or automatic transmissions and front-wheel drive (2WD) or all-wheel drive (AWD) – depending on model. For greater security when towing, the 2014 model has an improved ESC (electronic stability control), now incorporating a trailer stability control system and roll-over protection.

Made in Europe, the Sportage is Kia’s best-selling model in Europe, with 89,553 units sold in 2013, a year-on-year increase of 10.5 percent. Manufactured at Kia’s Žilina plant in Slovakia, the enhanced 2014 Kia Sportage is due to go on sale across Europe later this year. 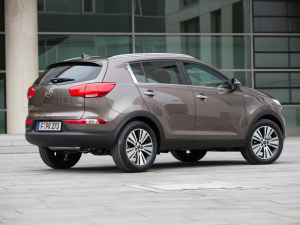 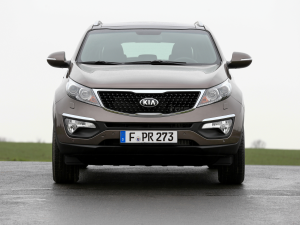 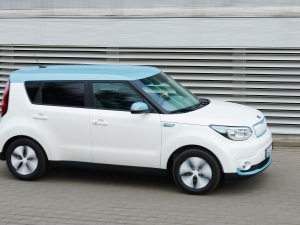