Frankfurt, 29 September 2014 – The all-new Kia Sorento will make its European premiere in Paris on 2 October, exhibiting a unique blend of style, practicality and technology, which builds on the success of the outgoing model. The new’s SUV’s smoother, swept-back profile and deeply sculpted surfaces introduce a higher level of sophistication for the third-generation model, delivering a premium look and feel, with more space and numerous innovative features.

The designers of the third generation Kia Sorento named their inspiration for the new car as ‘Streetwolf’. Although the styling changes are evolutionary, they subtly alter the character of the new Sorento, highlighting its sleek, sinuous, profile, while creating a sophisticated appearance and ensuring the new model has a bolder on-the-road presence.

In profile, the new model retains the Sorento’s hallmark long bonnet and characteristic wide D-pillar, but a lower roofline, higher beltline and swept-back shape give the car a more dramatic, muscular stance.

The rear of the car features more prominent ‘shoulders’ and a highly sculpted registration plate surround. The latter is made possible by the introduction of new laser welding manufacturing techniques – a first for a Kia model – which renders weld lines invisible, meaning the Sorento can do without the traditional (joint-masking) garnish on the tailgate.

The exterior styling of the new car was led by Kia’s Namyang design studio in Korea, with significant input from the brand’s Frankfurt, Germany and Irvine, California design studios.

‘Modern and wide’ theme for interior styling
Inside the all-new Sorento is where some of the most significant improvements are to be found. Interior styling was led by the brand’s European design team, based in Frankfurt, and Kia’s designers have created a more sophisticated, more luxurious cabin, featuring significantly higher quality materials.

The styling of the cabin follows a ‘modern and wide’ theme, providing the interior with a stable, horizontal layout and appearance. This width is echoed in the wider instrument cluster, interior garnish and the wrap-around shape of the dashboard which extends into the door trims. A higher proportion of soft-touch materials and leather creates a modern luxury feel to the cabin and gives the new Sorento a genuine premium vehicle ambience.

The flowing contours of the dashboard rise to incorporate the driver’s instrument binnacle, while the smoothly-styled design curve in the doors, which leads from the audio speakers up to the SUV-style grab handles, also endows the cabin with a more luxurious, sophisticated appearance.

Comfort, convenience and new technologies
Compared to the previous-generation model, the increased exterior dimensions and the extended wheelbase (+80 mm to 2,780 mm) have liberated additional space in the cabin of the new car.

Although the roofline is 15 mm lower, repositioned seat cushions ensure increased headroom for occupants in all three rows, who will also enjoy greater legroom. Cargo space also increases, with a longer cargo bay floor (up by 87 mm), and capacity with the third row seats folded flat up 17.5 percent, from 515 to 605 litres (VDA). The new Sorento also features a new under-floor tonneau cover storage compartment.

Available in 5- or 7-seat versions, the new Sorento features 40/20/40 second row split folding for improved versatility, with a higher folding centre armrest. The second row seats of the 7-seat version are equipped with ‘remote folding’ controlled by two levers in the side of the cargo bay, and also slide to allow easier entry and exit to the third row of seats.

The new Sorento debuts a number of new, advanced on-board technologies to improve convenience and further enhance the ownership experience. Depending on market, new available features will include: an Around-View Monitor, with four cameras helping the driver to manoeuvre when parking by displaying a birds-eye view of the vehicle on the dashboard display screen, and a Smart Power Tailgate. This system opens the tailgate automatically when the key is ‘sensed’ in close proximity to the trunk, so owners can slide their shopping bags or heavy objects straight into the vehicle.

Enhanced refinement
Throughout the development of the new Sorento, Kia engineers also focused on strengthening the bodyshell structure and improving NVH (noise, vibration and harshness) characteristics to increase refinement and create a tranquil travelling environment that is as sophisticated as the new model’s styling.

The increased torsional rigidity of the new bodyshell (up by 14 percent compared to the outgoing model) provides an excellent foundation for both enhanced refinement and improved safety.

NVH-reducing measures adopted for the new Sorento include new soundproofing material for the transmission tunnel, a 29 percent thicker dashboard soundproofing panel (increased from 0.7 mm to 0.9 mm), larger engine and transmission mounts for greater powertrain refinement and, for diesel models, a new DPF cover and an acoustic shield integrated into the engine’s timing chain cover. Cabin noise is reduced by 3-to-6 percent, depending on driving conditions.

Three engines are available with the new Sorento, offering power outputs ranging from 185 to 200 ps. These include a 2.4-litre gasoline direct injection (GDI) unit, and two turbo-diesel engines, in 2.0-litre and 2.2-litre capacities, which are expected to account for the majority of European sales.

When developing the new Sorento, a key focus for the Kia chassis engineering team was achieving improvements in ride comfort, high-speed stability and handling response to match the leaps forward in interior quality and NVH.

The fully-independent suspension retains the format of the outgoing model (MacPherson struts at the front and Kia’s multi-link system at the rear), but features a range of modifications. At the rear, the subframe supporting the suspension has larger bushings to better isolate it from the cabin and the larger shock absorbers are now mounted vertically behind the axle line, improving body control motion.

These changes, together with the longer wheelbase, deliver a more compliant ride, with a more progressive response to bumps in the road, making the new Sorento a very comfortable place in which to spend time on longer journeys.

At the front, an all-new electric motor-driven power steering system (R-MDPS), available as standard across Europe, is mounted directly onto the steering rack – rather than the steering column as on the outgoing model. This provides greater steering feel and quicker response, ensuring that new Sorento will be among the more agile and sporty vehicles in its segment, without sacrificing the ride quality that customers expect from a luxurious SUV.

Better passive and active safety
The structure of the new Sorento is significantly stronger, thanks in large part to the more widespread use of ultra-high tensile steel. The previous-generation model was made up of 24.4 percent ultra-high tensile steel (UHTS), while the bodyshell of the new model consists of 52.7 percent UHTS, aiding the integrity of the car’s core structure in the event of an impact and also improving torsional rigidity. The stronger steel has been used to reinforce the wheel arches, tailgate surround and rear-wheel surround.

The new Sorento also features more than twice as much ultra-strong hot-stamped steel as the outgoing model, up from 4.1 percent to 10.1 percent in the new model, greatly strengthening the A- and B-pillars.

Buyers of the new Sorento will be able to choose from a wealth of ‘active’ safety technologies – depending on market. Available systems will include: ASCC (Adaptive Smart Cruise Control); LDWS (Lane Departure Warning System), which emits an audible alert when the driver strays from the chosen lane without using indicators;; BSD (Blind-Spot Detection), with a visual warning in the door mirror when another car is in the driver’s blind spot; RCTA (Rear Cross-Traffic Alert), which warns against other cars driving behind the Sorento in car parks; and SLIF (Speed Limit Information Function), which displays the speed limit in the driver’s instrument cluster based on cameras detecting roadside signs. 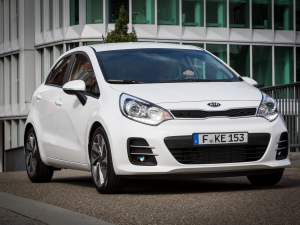 Head of Marketing and PR